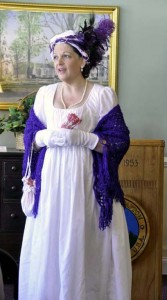 Patricia Perry presented “Dolley Madison Remembers”, an historical interpretation in an engaging first-person monologue by the wife of the fourth President of the United States. Dolley, born in the month of May, related her personal memories of her first marriage to John Todd, who died from yellow fever when Dolley was just 25. Her subsequent courtship by James Madison followed barely a year later. She also regaled the audience with tales of Benjamin Franklin, life in Philadelphia, favorite ice cream flavor (you’ll never guess) and especially the invasion of Washington by British forces under the command of Admiral Cockburn, requiring her to flee the White House with Washington’s portrait … before her roast had finished.

Patricia Perry of Sneak Peek Productions from Rhode Island, is a professional historical interpreter, a member of the Association for Living History, Farm and Agricultural Museums and the former Chairperson for the Blackstone Valley Interpreter Network. And she is a wonderfully entertaining one at that! 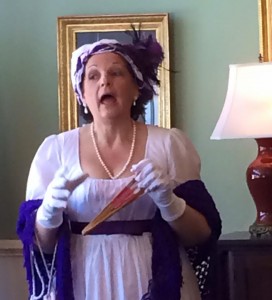 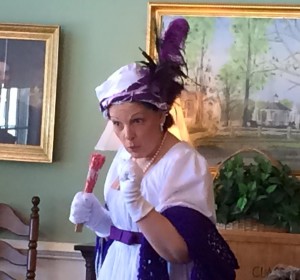