Among several research projects that the Grafton Historical Society is currently working on is an effort to compile information about a mid to late 1800’s facility known simply as the “Base Ball Grounds.” The “Grounds” were located in Grafton Center, to the southeast of the Common, behind the Baptist Church and adjacent to the Grafton and Upton Railroad Station. The grounds were reached by a road that connected to South Street and accessed several back property lots. The location of the Grafton base ball grounds is shown on an 1898 Worcester County Atlas. Of particular interest in 2011, the Grafton base ball grounds were located on what is now known as the Perreault property that was recently purchased by the town of Grafton. 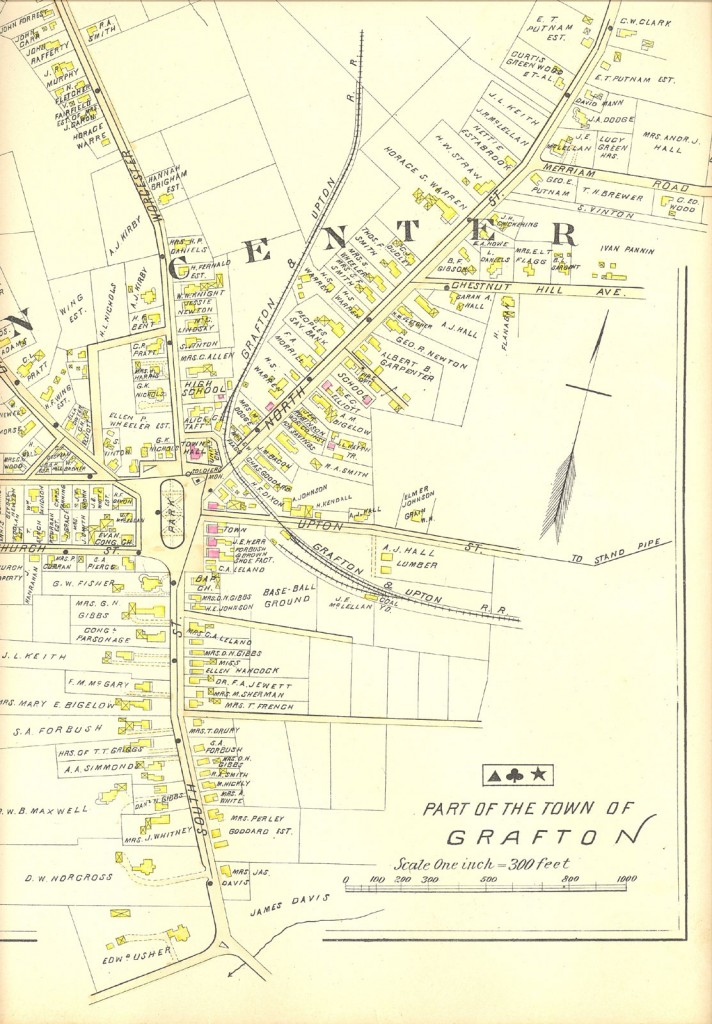 Image from 1899 Atlas – Click on Image to enlarge map

The Historical Society’s History and Research Committee has compiled information about the Grafton Base Ball Grounds, how long the facility was in use, and what teams played there. In the 1985 publication “Grafton at 250,” there is a brief mention of an annual Red Sox exhibition game being played in Grafton around the turn of the century at a “field on Upton Street back of the coal company yard,” and “on the day of the game it was not uncommon to have 5,000 people congregate, many seated on open bleachers, and horses and buggies everywhere.”

Initial research of Worcester newspapers from 1897-1899 found mentions of a “Hassanamisco Park” and games being played by an amateur baseball team called the “Graftons.” One newspaper article noted that a particular contest at the ball grounds was expected to be so well attended that advance tickets were sold at the Grafton center post office. The newspaper accounts of that time are sketchy at best, but a Grafton baseball club was holding regular meetings at the Grafton Inn. No mention of the base ball grounds appears in any of the Grafton town reports of the later 1800’s and no photographs of the Grafton base ball grounds have been found.

The committee was aware of major league baseball records showing several Grafton born players, most notably Hugh Bradley, a utility infielder for the 1912 Boston Red Sox who hit the first home run in Fenway Park, and William Warren “Hick” Carpenter, a left handed throwing third baseman for Cincinnati’s major league teams of the 1880’s. After additional newspaper research the research committee found game accounts of a Grafton baseball team playing in 1874 and 1875, playing some games at the grounds in Grafton Center and others at the Agricultural Fairgrounds in Worcester. The Grafton team won the Massachusetts amateur baseball championship in 1875. A picture of the 1875 team, discovered in the Historical Society’s photo archives, shows five players, including Grafton residents Asa Stratton, George Adams, and William Carpenter, all of whom went on to play at least one game of major league baseball in the 1880’s. 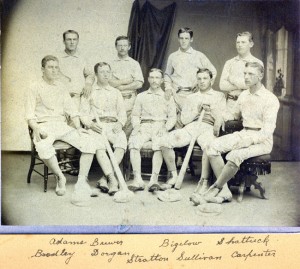 Further research, now assisted by members of the 19th century committee of the Society of American Baseball Research, have documented that baseball was played on the Grafton base ball grounds as early as August 31 of 1860. This pre civil war time period is consistent with documentation of an 1859 championship team playing in Upton known as the “Excelsiors.”

The Grafton Historical Society is a private organization that collects, preserves and interprets objects related to the history of Grafton, Massachusetts. The office and museum are located in the lower level of the Grafton Town House. (the former Town Hall). The Historical Society is managed by a twelve member volunteer board of directors, along with a core of dedicated volunteers. Educational programs are held September through May. For additional information, contact Historical Society President Nancy Therrien at 508-839-0000 or email at graftonmahistory@gmail.com