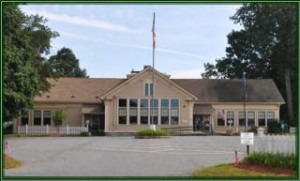 The Community House, originally  built as the Farnumsville School House in 1872 where workers at the Wuskanut Mill sent their children to be educated, was renovated in 2004 as one of the cornerstones of the major rejuvenation of South Grafton.

The town built #27 Main street in 1872, to replace a “worn-out, dilapidated” brick structure that was no longer adequate to serve the growing population of schoolchildren in Farnumsville for the families who worked in the Farnumsville Mill. A large, thoroughly modern schoolhouse for its time, the new building was the result of long efforts by the school committee to raise money for a “suitable school building” at Farnumsville, which, along with the Waterville district, was “sadly in need of school accommodations.”

After being used for over 60 years to teach several generations of children, the building was closed in the late 1930’s and turned back to the town.  It soon became the home of the Alfred J. Demers Post #37 of the American Legion which prior to then had been meeting in Fisher Hall at Fisherville since its organization in 1919.